Singer Aima Baig has been making headlines ever since British model Taloulah Mair accused her of cheating on ex-fiance Shahbaz Shigri with filmmaker Qes Ahmed who was dating the model at the time.

The whole controversy has led to deteriorating mental health for Baig who urged her followers to empathise with her and not blindly trust people who are sharing things online for “money” and “followers.” Referring to the videos posted by Mair on Instagram, the Baazi singer claimed that she was “told what to say in those videos over texts and even her boyfriend [Ahmed] knows that.”

While Shigri has not commented on the situation yet, many celebrities extended their support to the former couple, especially Baig. 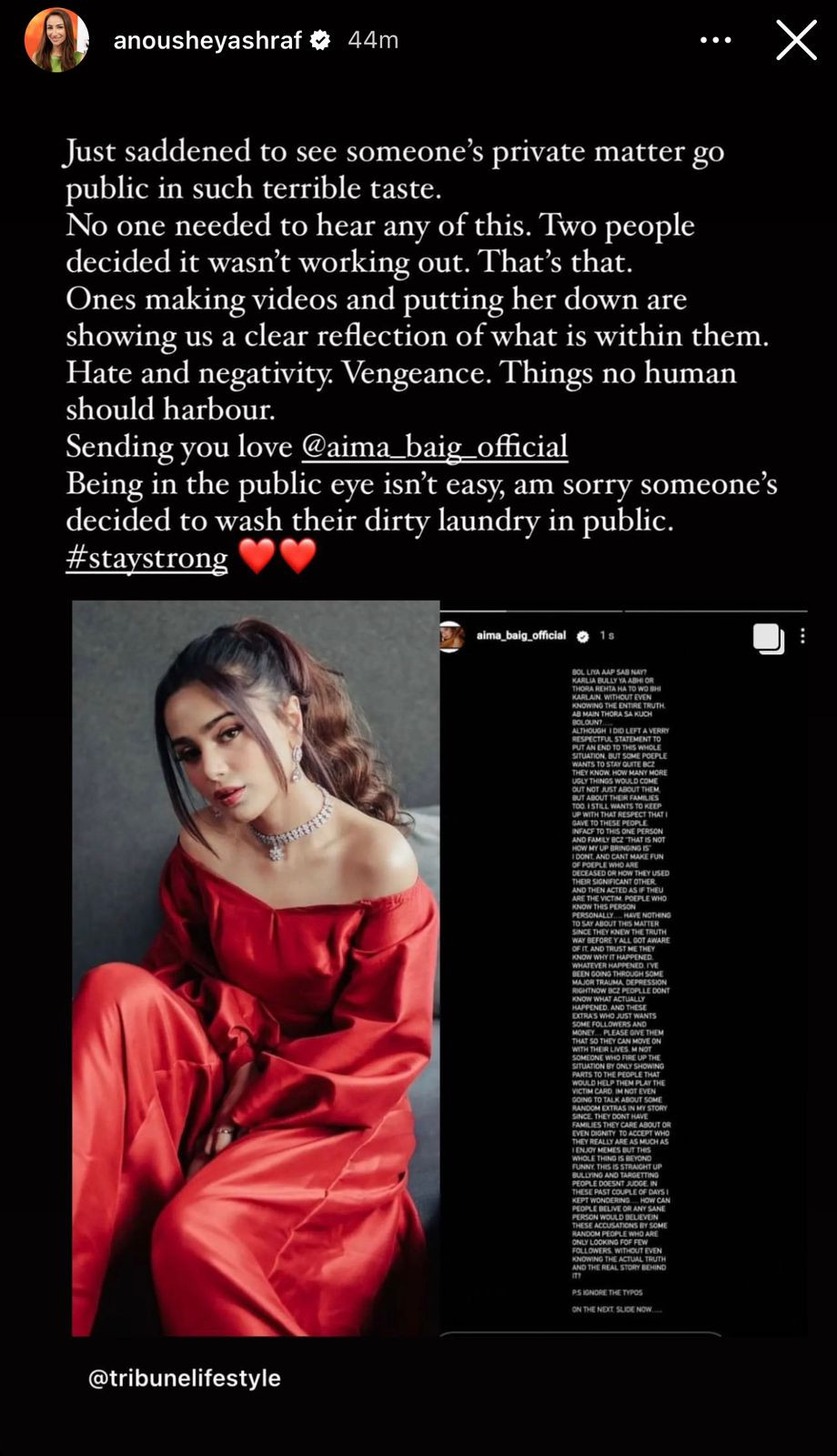 Anoushey Ashraf apologised to the singer for what she had to go through. “Just saddened to see someone’s private matter go public in such terrible taste. No one needed to hear any of this. Two people decided it wasn’t working out, and that’s that. The one making videos and putting her down is showing us a clear reflection of what is within them. Hate, negativity and vengeance, are things no human should harbour. Sending you love, Aima. Being in the public eye isn’t easy, I’m sorry someone decided to wash their dirty laundry in public. Stay strong,” she wrote on her Instagram story. 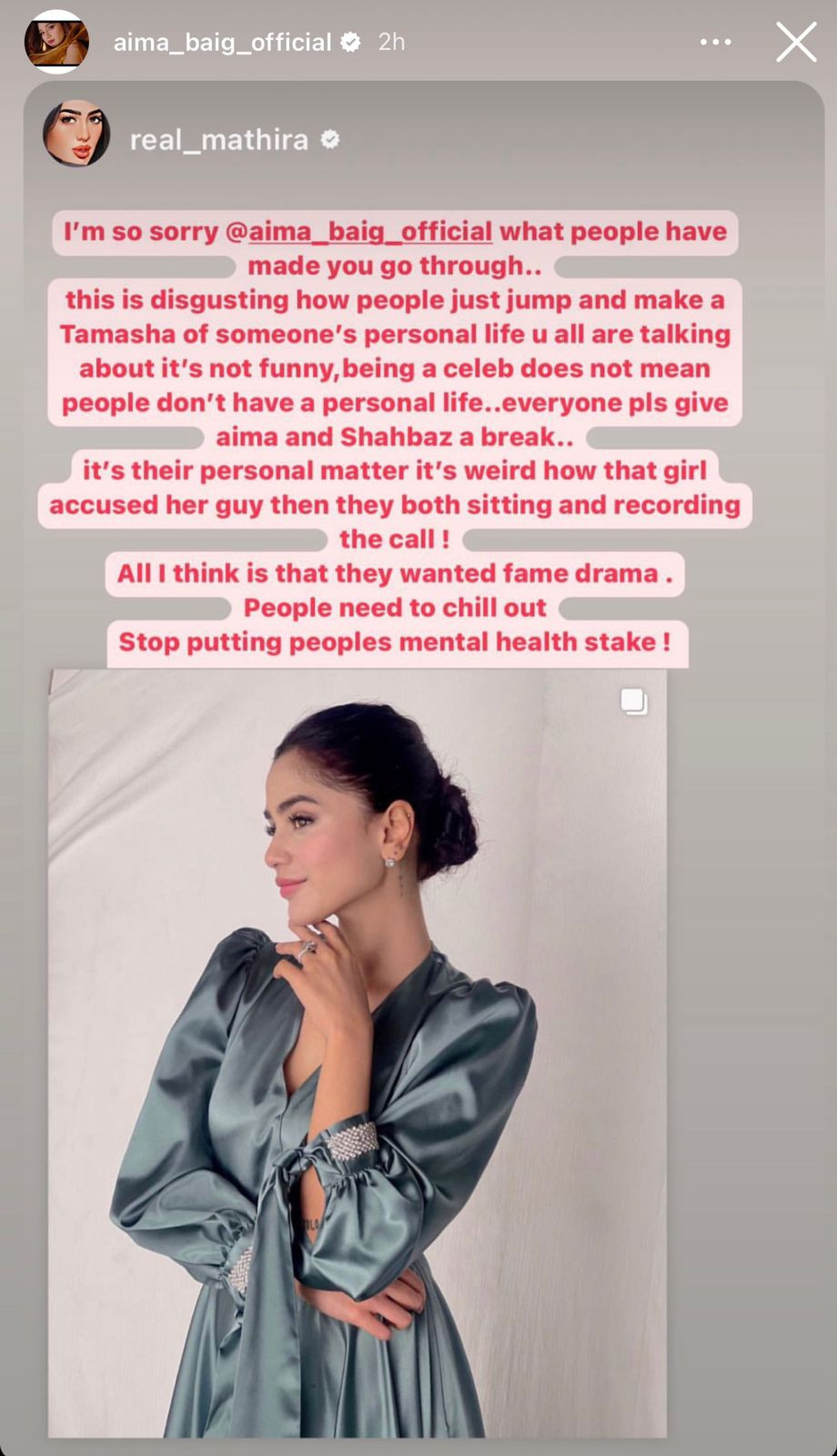 Mathira also found the whole “drama disgusting” and asked people to give “Aima and Shahbaz a break.” She wrote, “I’m so sorry Aima for what people made you go through. It’s disgusting how people just jump and make a tamasha out of someone’s personal life. It’s weird how that girl accused her guy and then they’re both sitting and recording the call. All I think is that they wanted fame and drama. People need to chill out. Stop putting people’s mental health at stake.”

After months of speculation, Baig confirmed the news of her and Shigri parting ways on Friday evening. The former couple announced engagement last year. Taking to Instagram, the Do Bol crooner shared that the duo is ‘doing good and fine.’

“Yes, I will always respect this person for giving me a good time,” Aima shared in a statement on social media. “Sometimes, sh*t happens for a reason. And to answer all your questions, yes we have parted ways. But we are both doing good and fine, so don’t worry.”

Johnny reportedly dating his attorney but it’s not Camille

Johnny Depp has moved on and is now dating his lawyer, reported Page Six. But it’s not Hollywood’s favourite attorney, Camille Vasquez. The 59-year-old actor is said to be in a relationship with his UK libel case’s London-based lawyer Joelle Rich.

The report further said that the lawyer is married but separated, and her divorce may not be finalised yet. Quoting a source, the outlet further said that Depp’s and Rich’s “chemistry is off the charts,” adding, “It’s serious between them. They are the real deal.” 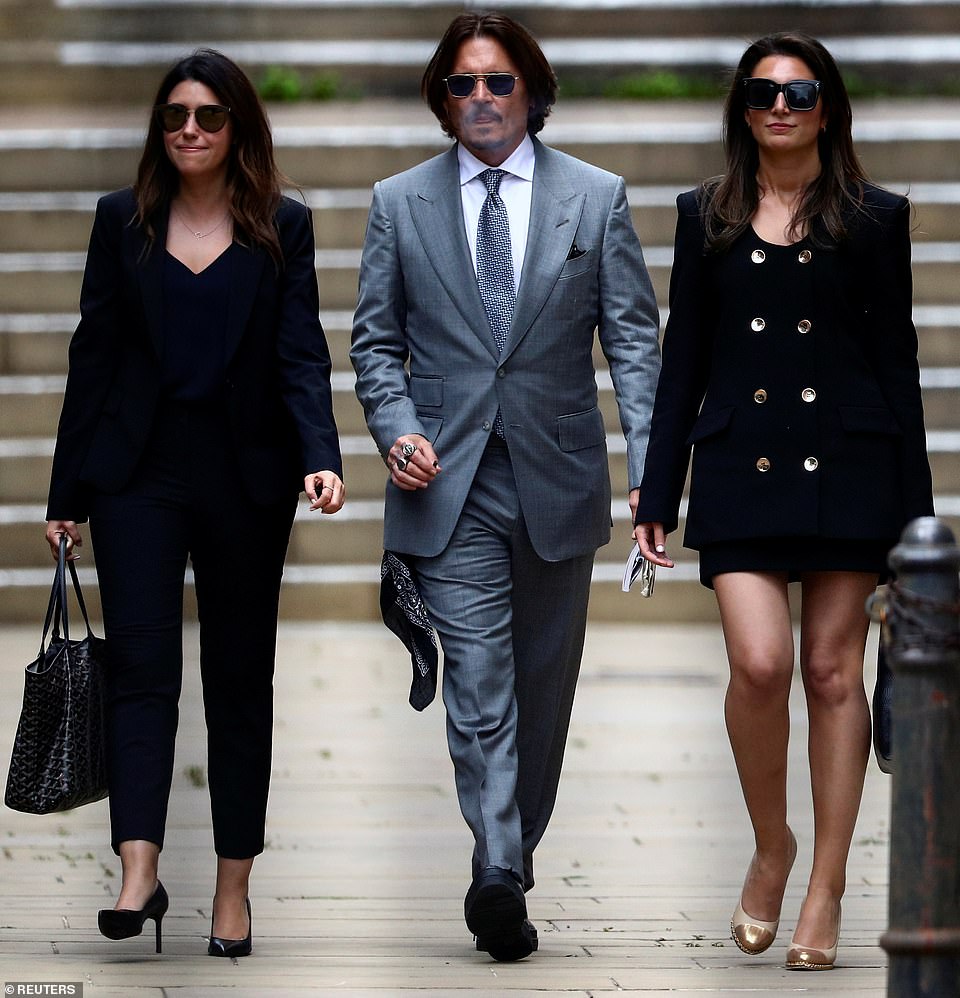 Rich was one of the lawyers who worked on the Pirates of the Caribbean actor’s case against the UK newspaper after he sued the outlet for libel in 2018, but she was not part of the legal team who represented him in his defamation trial against ex-wife Amber Heard earlier this year. She was, however, present in the Virginia courtroom to show her “support” for the Oscar nominee.

“There was no professional obligation for her being there. It was personal,” the source tells Us, adding that the duo “discreetly” met up in hotels during the early stages of their romance. The insider notes that Rich was married when she met the Hollywood star, but is now divorcing her husband. She and her estranged spouse share two children. Earlier, the actor and his attorney, Vasquez (she was one of Depp’s lead attorneys during his six-week defamation trial against Amber Heard) sparked dating rumours. However, Vasquez denied these rumours.

She said she cares deeply about her clients. “I guess it comes with the territory of being a woman just doing her job. It’s disappointing that certain outlets kind of ran with it or said that my interactions with Johnny – who is a friend and I’ve known and represented for four-and-a-half years now – that my interactions in any way were inappropriate or unprofessional. That’s disappointing to hear,” she had said at that time.

Speaking to People, Vasquez revealed that she has a boyfriend and that they are very happy in their relationship. “It’s unethical for a lawyer to date their client,” she said, adding, “It’s unfortunate and it’s disappointing, but at the same time, it kind of comes with the territory. I can’t say I was all that surprised.”


Colombian superstar Shakira vowed to fight what she claimed were “false” accusations by Spanish authorities that she dodged 14.5 million euros ($14.31 million) in taxes, in her first public comments on a case that could see her sent to prison for up to eight years.

Shakira, 45, is facing trial in Spain accused of failing to pay taxes between 2012 and 2014, a period in which she said she was leading a “nomadic life” because of her work.

“I have to fight for what I believe because these are false accusations,” the ‘Hips don’t lie’ singer told Elle magazine in an interview published online in the United States on Wednesday and due to run in its October print edition. “I owe zero to them.”

The prosecutor’s document, seen by Reuters, asserts that Shakira spent more than half of each year in Spain between 2012 and 2014, and in May 2012 bought a family home in Barcelona. In July last year, a Spanish judge said he had seen “sufficient evidence” for Shakira to face trial. A second judge rejected her appeal against the decision in May.

Shakira, who in July rejected a deal with the prosecutor to settle the case, says the authorities only came after her “with their eyes on the prize” when they found out she was dating FC Barcelona soccer player Gerard Pique, who is Spanish. “While Gerard and I were dating, I was on a world tour. I spent more than 240 days outside of Spain, so there was no way I qualified as a resident,” she said.

“The Spanish tax authorities saw that I was dating a Spanish citizen and started to salivate. It’s clear they wanted to go after that money no matter what,” the singer claimed.

Shakira added that she had already paid what the Spanish tax office said she owed before they filed a lawsuit. She said she was confident that she had behaved correctly and transparently from the beginning, suggesting the Spanish authorities “resorted to a salacious press campaign” to damage her reputation.

The combination of her recent separation from Pique, a custody battle for their two children, the illness of her father and “fighting on different fronts” meant she was facing “probably the darkest hour of my life,” the singer said.

On split with Gerard

The singer has now spoken up and shared how their children are coping with the breakup. “I’ve remained quiet and just tried to process it all. And yeah, it’s hard to talk about it, especially because I’m still going through it, and because I’m in the public eye and our separation is not like a regular separation. And so it’s been tough not only for me but also for my kids. Incredibly difficult,” E! News quoted Shakira as saying.

“I have paparazzi camping outside, in front of my house, 24/7. And there’s not a place where I can hide from them with my kids, except for my own house. You know, we can’t take a walk in the park like a regular family or go have an ice cream or do any activity without the paparazzi following us. So it’s hard,” she added.

However, the Hips Don’t Lie crooner is doing her best to shield her kids from the breakup and the media attention. “I try to do it and to protect them because that’s my number one mission in life. But then they hear things in school from their friends or they come across some disagreeable, unpleasant news online, and it just affects them, you know?” Shakira continued.

The breakup, however, is still hard to digest for Shakira. “Sometimes, I still feel like this is all a bad dream and that I’m going to wake up at some point.” Talking about her relationship with the soccer star, she said, “It’s real and what’s also real is the disappointment to see something as sacred and as special as I thought was the relationship I had with my kids’ father and see that turned into something vulgarised and cheapened by the media.”

The couple had been together for more than 11 years, having started dating in 2010. The pair has two children together. They first met at the 2010 FIFA World Cup in South Africa, when Gerard was featured in the music video for Shakira’s Waka Waka (This Time for Africa) – the tournament’s official song.

England’s Southgate brushes off the boos