Novelist and writer Munir Ahmad Badini from Balochistan have been nominated for the Kamal-e-Fun Award 2018 of the Pakistan Academy of Letters, among the highest literary awards of the country.

The award was announced by the Pakistan Academy of Letters (PAL) Chairman Dr Yousuf Khushk during a news conference on Monday following an online meeting of the academy’s awards committee.

Dr Khushk added that the national literary award for 2018 was awarded for the best literary books written during the year, either in Urdu or other Pakistani languages.

He added that the panel of judges had awarded the Saadat Hasan Manto Award (Creative Literature) for Urdu prose to Hasan Manzar’s book “Jhijak”. Baba-i-Urdu Molvi Abdul Haq Award (Criticism and Research) was given to Dr Tahseen Firaqui for the book “Nikat”.

Throughout history, art and politics have continuously been intertwined due to the former’s role in forming the society’s cultural identity.

Acclaimed Graffiti artist and political activist, Banksy, is known for combining his dark political humor with unique and extraordinary stenciling technique to create powerful artworks that respond to contemporary societal and political issues, according to Guyhepner.

Banksy is also among the most controversial street artists on the modern global stage, with his most famous pieces being Stop and Search (2007), Girl with Balloon and ‘Bomb Hugger’.

Here are some of his most recent works of art as compiled by DW that appeared during the climate change protests and Black lives matter movement:

A statement on systemic racism 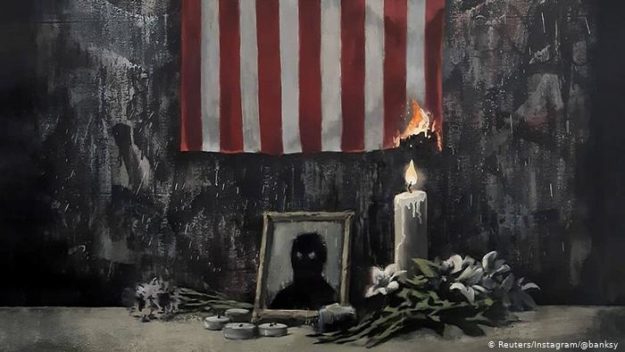 A vigil candle sets fire to the US flag: Banksy has revealed on Instagram a new painting commenting on George Floyd’s killing and honoring the Black Lives Matter movement. “People of color are being failed by the system. The white system,” the artist wrote. “This is a white problem. And if white people don’t fix it, someone will have to come upstairs and kick the door in,” he added.

The superheroes of the coronavirus pandemic 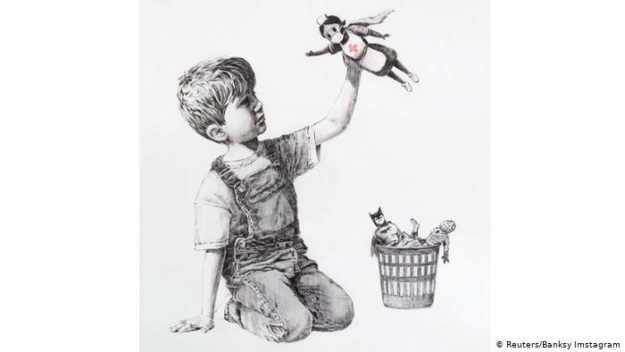 Spiderman and Batman are the yesterday’s superheroes: this little boy prefers to play with a nurse wearing a face mask and a cape. With this picture revealed at the beginning of May 2020, Banksy paid tribute to the outstanding contribution of doctors, nurses and hospital workers during the COVID-19 pandemic. 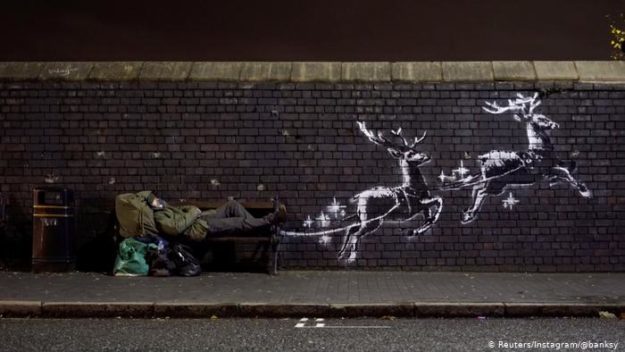 ‘Devolved Parliament’ — Made in Britain 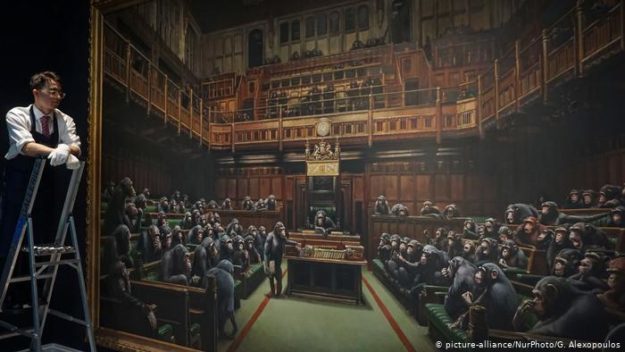 Famous, but elusive street artist Banksy created in 2009 “Devolved Parliament,” featuring chimps instead of politicians in the British Parliament. Amid the chaos caused by Brexit, the work embodies the country’s political atmosphere. The 2.8 x 4.5-meter (around 9 x 15-foot) painting was auctioned off in London in October 2019 for 9.8 million pounds (around €11 million).

And it’s half gone… 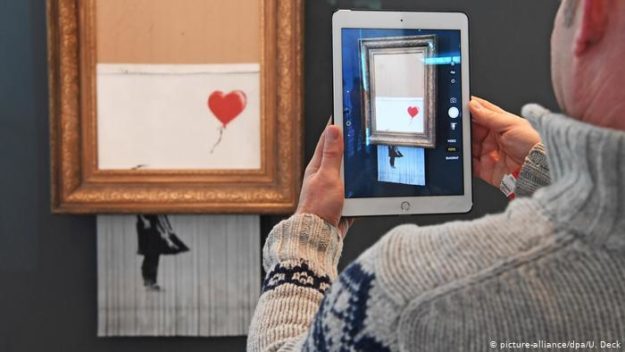 Another auction at Sotheby’s in London also caused a huge stir. Just after Banksy’s painting “Girl with Balloon” was sold for 1 million pounds (then 1.2 million euros) in 2018, it began to self-destruct as a shredder was hidden in the lower part of the frame, but it did not complete the process. It morphed into “Love is in the Bin.” The motif first appeared in 2002 as a mural in London.

On show rather than at auction 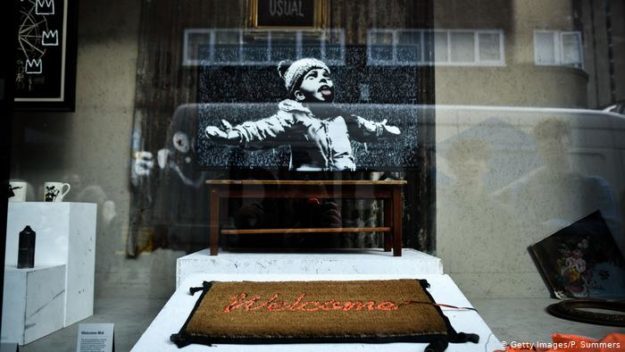 The millions of pounds that “Devolved Parliament” reaped in October also sparked criticism, with no information about the buyer provided. Likewise in October, Banksy installed artwork in a closed shop in London as a commentary, saying that artworks at auction had become the property of the rich rather being the common property of people at large.

The World of Banksy 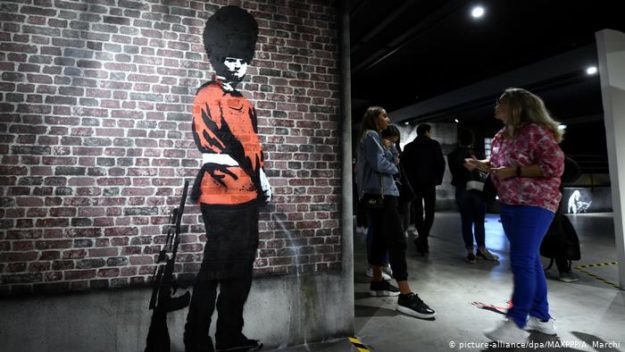 Banksy is one of the most famous street artists in the world, yet his true identity remains under wraps. Paintings or drawings on paper are rare creations of his. Instead, the British artist sprays most of his works anonymously on buildings, walls, and demolition ruins. Such street art is not for sale. 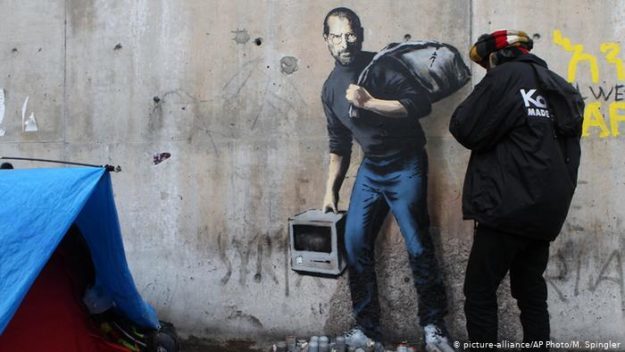 A recurring theme in his works is the predatory nature of global capitalism. Banksy sprayed this mural in the entrance area of the refugee camp in Calais, southern England. Depicted is the late Apple founder Steve Jobs, carrying his legendary first Mac computer. The father of the Apple director hailed from Syria.

A statement about Brexit 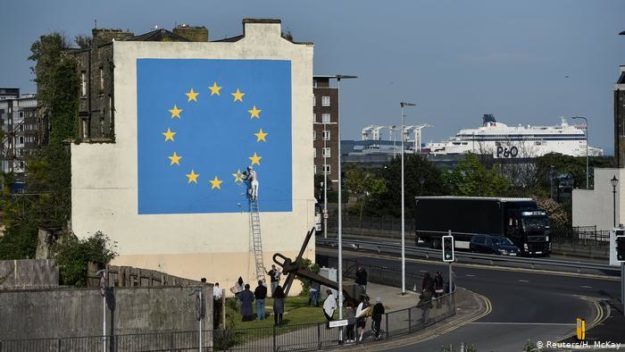 Banksy addressed the Brexit debate in the UK with this work back in 2017. Overnight, this picture appeared on the wall of a house not far from the ferry port in Dover ferry port: It shows a man standing on a ladder trying to remove one of the EU stars with a hammer and chisel. The image has meanwhile disappeared from the wall, with someone having whitewashed it. 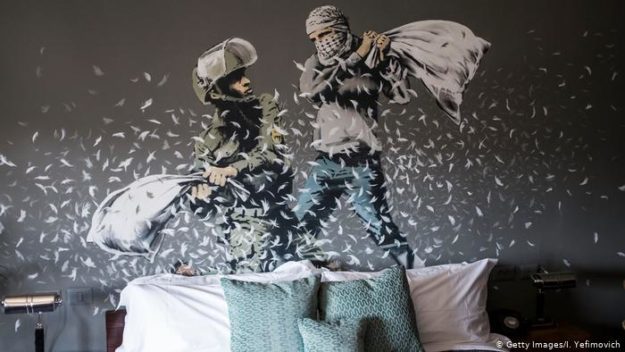 The British street artist has also addressed the Israeli-Palestinian conflict. In 2017, Banksy opened The Walled Off Hotel, an actual hotel featuring his artworks, in Bethlehem right next to the controversial Israeli West Bank barrier. The artist has also left quite a few of his artworks throughout this historic town since 2005, drawing many tourists on a “Banksy Tour.”

War is not a child’s game 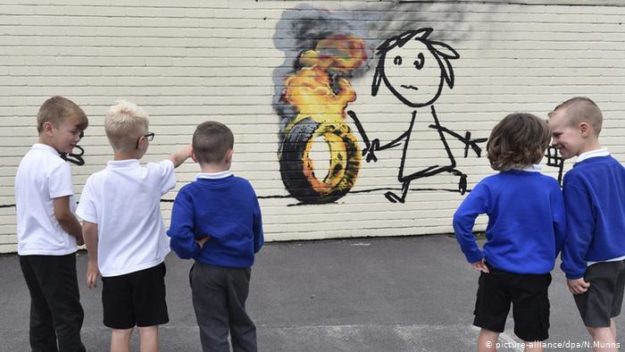 One known fact about Banksy’s identity is that the world-famous artist comes from Bristol in southern England. He moved on to London at the end of the 1990s and began to spray his pictorial messages onto the walls of selected locations. Here, he was back in Bristol in 2016, leaving behind a mural at a English primary school in Whitchurch. 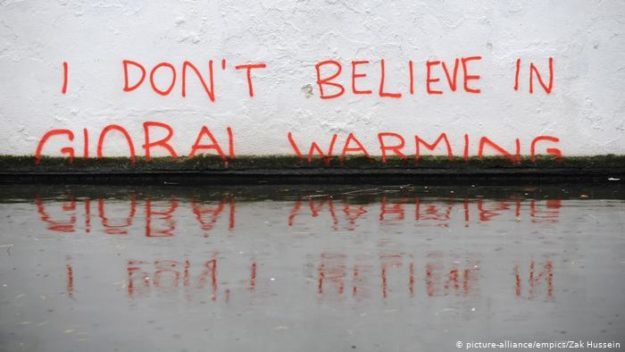 As an artist, Banksy has always been a visionary. In his wall works, he has often addressed the political problems of the future, such as global warming, as shown here. He created this sprayed message in London in 2009 — long before US President Trump announced this sentence in all seriousness.

Criticism of the media 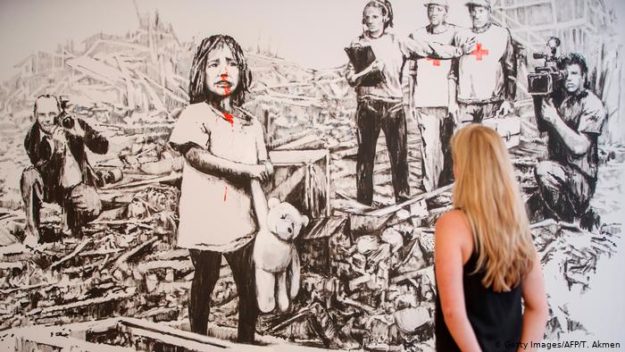 Banksy has also denounced the brutalization of the media, which jumps onto the bandwagon of sensationalism with regard to war and terrorist attack victims. This is depicted in this work entitled “Media at war,” which, like some of his other works, has not been sprayed onto a building wall, making it possible to exhibit it in a gallery, such as here in London in 2018.

Malala Yousafzai recently graduated from Oxford with a degree in Philosophy, Politics and Economics.

Malala took to Twitter to share her excitement at this big milestone of hers, posting a happy picture with her family, cutting a cake.

Hard to express my joy and gratitude right now as I completed my Philosophy, Politics and Economics degree at Oxford. I don’t know what’s ahead. For now, it will be Netflix, reading and sleep. 😴 pic.twitter.com/AUxN55cUAf

“Hard to express my joy and gratitude right now as I completed my Philosophy, Politics and Economics degree at Oxford,” she wrote.

Soon after she shared the news on social media, many celebs and famous personalities congratulated her on achieving the milestone.

From the likes of Priyanka Chopra, Juggun Kazim, Mindy Kaling, Samina Peerzada, Kamila Shamsie, Elif Shafak and many others, the youngest Nobel Prize laureate was wished the best for the future.

Here’s what they had to say: 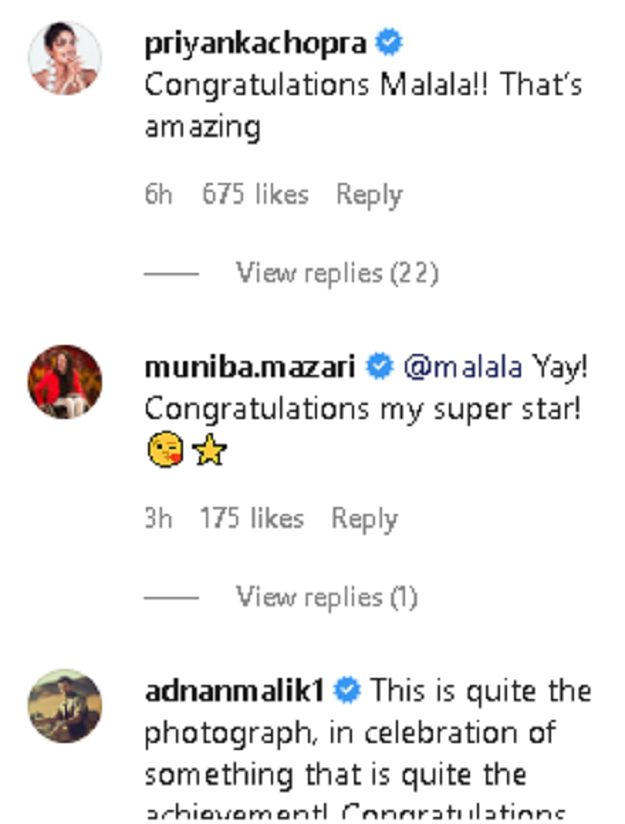 Mubarak! To you and your parents @ZiauddinY (Enjoy Netflix, reading and sleep. Maybe get some eating in there too)

Wonderful! You are a true inspiration to girls all over the world. My heartfelt congratulations 🎂📚📚

Here’s wishing Malala all the best of luck on her journey post this. Happy Graduation!

The month of June has been a painful one for the literature canvass of Pakistan.

“This month has been very painful for the world of literature. Many important writers have left this month,” Dr Khushk said in a condolences message. “Their demise is a great loss to Pakistani literature,” he added.

Teacher, poet, writer and critic Manzar Ayubi was one of the prominent poets of this time. He achieved a special place by writing short poems. His ghazals also have a special distinction.

Urdu poet, critic Sarwar Javed has prominent colours of the era is in the poetry. Progressive poetry is an important part of it. The canvas of his poems is also very wide.

Muhammad Khalid was also an important poet of the ghazal. He greatly influenced his contemporaries as well as young generations.

Anchor, actor, politician and intellectual Tariq Aziz, was also a poet of Urdu and Punjabi and a knowledgeable person. He has been using his pen as a way of impression. His study was very extensive.

Saraiki and Punjabi poet Rabb Nawaz Miskin was one of the important writers of his times. He served literature quietly in Jauharabad all his life.

Wazir Hussain Rahi from Skardu had written humorous poetry in Balti language against social weaknesses and injustices. He was a powerful voice in the Balti language.

The writer and secretary of the Khattak Literary and Cultural Jirga, Nobahar Shah Khattak was an important name in the Pashto literature. He did a lot of service to the literature through poetry as well as literary programmes.

Qadir Khan Sartaj was living in the UK and was serving Urdu and Pashto Literature. He was known as an Urdu and Pashto poet.
Dr Khushk said that with the passing of these writers, Pakistani literature lost important writers. Expressing deep sorrow over the demise of the deceased, the PAL Chairman prayed for forgiveness of the departed.